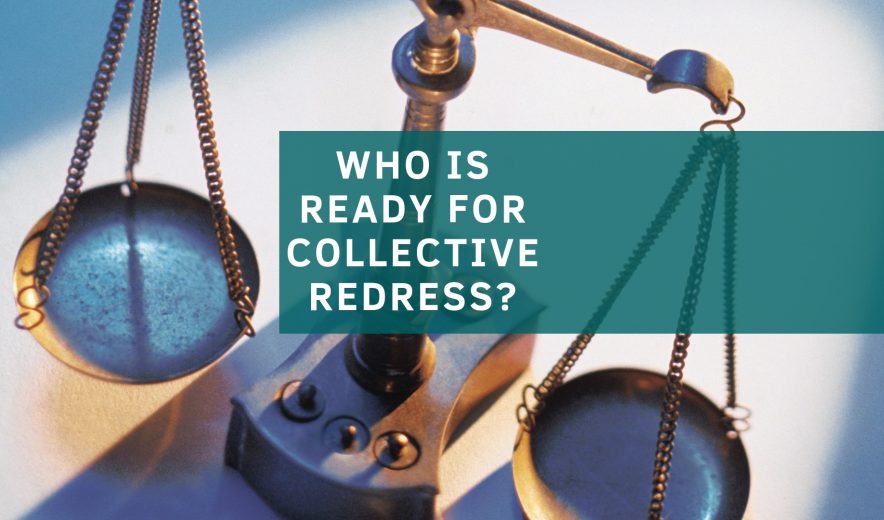 Who is ready for collective redress?

Compared to the US, class actions and collective compensation are under-utilised practices in Europe. Collective redress is available in only 19 Member States; and where it is available, scope and procedures differ significantly.

The European Commission sees important principles at stake. Firstly, Commission attempts to encourage Member States to consider introducing national collective redress over the past six years have not been very successful:  only a handful have so far done so. Secondly, it seems unacceptable that the EU’s much-vaunted high level of consumer protection is not underpinned by an equally strong enforcement mechanism. Thirdly, there is a “justice gap”, because the rights of consumers and businesses differ depending on their location within the EU. This is particularly acute in cross-border claims.

Under the circumstances, it was now or never for the European Commission. But why did the proposed Directive on representative actions for the protection of the collective interests of consumers (the “Representative Actions Directive”) come so late?

The EU toolbox for enforcing consumer rights has not exactly been empty. The 2009 Injunctions Directive allows consumers to collectively put an end to an infringement of EU consumer rights. When it comes to compensation for harm suffered, the EU previously stopped short of legislation and in 2013 produced a set of recommendations for Member States to follow. These suggestions fell on deaf ears and the Commission therefore felt the need to give teeth to the Injunctions Directive by introducing legislation to further support redress.

The proposed Directive deals delicately with this matter, even though it would repeal and replace the Injunctions Directive. It has to:  legal procedure, including collective redress, belongs to the regal domain of Member States’ competences. The proposal is therefore based on the Commission’s minimum harmonisation powers, which means it has limits. As a consequence, the collective redress system will remain highly fragmented even once the Directive is adopted: legal procedure, which is often decisive for the effective enforcement of consumer rights, cannot be amended by an EU-wide instrument.

When the proposal was presented in 2018, it was immediately denounced by business as excessive and imbalanced. The core of the criticism was that without appropriate safeguards, this proposal would fuel a for-profit litigation industry, as has happened with the US class action system – something that nobody wants in Europe (with the possible exception of some law firms).

Striking the right balance between consumer protection and safeguards for business without encroaching on Member State competences has been the holy grail for lawmakers.

The fact that under the new EU regime only qualified, non-for-profit entities such as consumer organisations can bring a representative action has been presented as the ultimate safeguard against abuse of the collective redress system.

A comparison of the original proposal and the position of the European Parliament adopted at the end of March shows that some, but not all, of business’s suggestions were taken on board. The safeguards that were adopted include limits to funding arrangements, more robust criteria for qualified entities, prohibition of conditional fees (“no win, no fee”) and the “loser pays” principle.

This is all laudable. But the fact remains that the purpose of the Directive is not to harmonise legal procedure. The real added value of the Directive is supposed to be that it creates a collective redress system in Member States where none currently exists. It also expands the list of legislation where infringement can lead to collective redress to include areas such as financial services, healthcare, privacy and insurance. Finally, it allows cross-border redress for groups of consumers from several countries.

Taking a broader view of the European regime for collective redress reveals some complex issues. Firstly, some of the legislation covered by the Directive already provides for specific collective redress systems. The most topical case in point is the General Data Protection Regulation (GDPR), which allows Member States to choose whether to allow representative bodies to bring unmandated class actions for data breaches. Faced with an EP position on the Representative Actions Directive to require mandatory collective redress in this area, Member States will either have to negotiate with the Parliament to strike this and actively preserve the status quo, or accept a loss of discretion. In the latter case, they will need to align the GDPR and general redress regimes as far as possible and prevent parallel claims.

Secondly, existing EU rules on cross-border litigation are not suited to collective redress. Currently, rules preclude the same claim from being brought between the same parties in different Member States. However, in the absence of an “opt-in” system requiring an explicit consumer mandate, it is often not clear who the parties to a legal dispute are. For the time being, there is no satisfactory response to concerns about possible parallel procedures and possible divergent outcomes.

The proposal would allow foreign-registered qualified entities to pursue a collective redress action in another Member State. This is relevant given the Schrems case, where the European Court of Justice confirmed that consumer collective actions cannot be heard in the national courts where the consumers are domiciled. Therefore, consumers seeking redress must bring a claim before the court of domicile of the defendant. The mutual recognition of qualified entities will enable EU-wide consumer harm to be addressed.

From an enforcement point of view, the Directive represents a step forward from the 2013 recommendation; however, several important issues remain to be resolved in the Council of Ministers. As Member States try to negotiate a common position, and with the Romanian Presidency having signalled as far back as December 2018 that it envisaged a debate at the Competitiveness Council on 27 May – just as Europe comes to terms with its election results – we will see how much national procedural autonomy they are willing to bargain with.

It also remains to be seen whether business has overstated its concerns. The proposed rules are still a far cry from a US-type class action regime, but the Directive will inevitably become a powerful tool for European consumers. Companies should be prepared for that, not least from a reputational point of view.