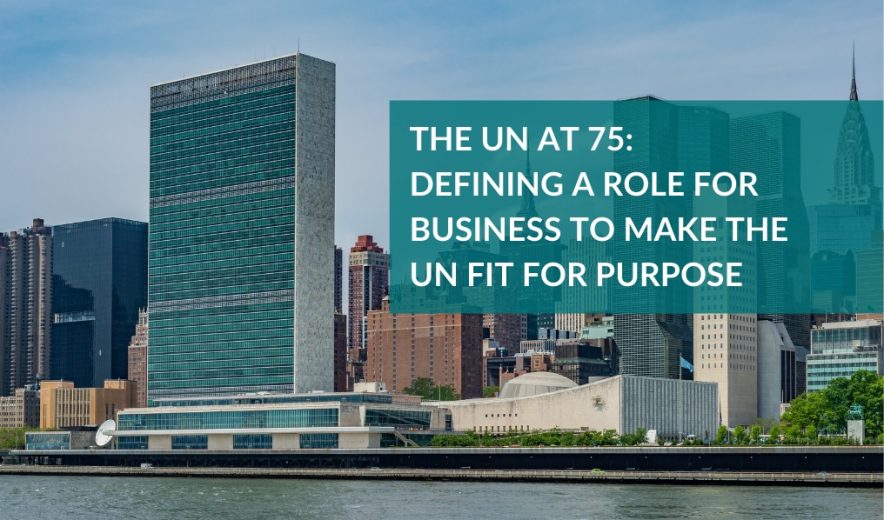 The UN at 75: Defining a role for business to make the UN fit for purpose

H.E. Mr. Volkan Bozkir of Turkey will preside over the 75th session of the General Assembly, opening this week in New York.

Public-private partnerships have long been a part of the United Nations’ work, but they have largely existed outside of the policy-making process, serving to implement the agenda driven by Member States. Though logical given the UN’s original mandate, the UN has vastly expanded its work since 1945, and so have the opportunities and need to engage with a broad range of stakeholders.

2020 marks the UN’s 75th anniversary, an occasion that was planned to be part stock-taking exercise, part celebration of multilateralism. Then the coronavirus swept the world. Billions of individuals have felt the impact of COVID-19 on an acutely personal level. The pandemic has also shown us how intimately public health, the economy, climate, and global demographics are intertwined. Yet as leaders call for increasing cooperation to address the crisis, many countries have looked inward, some forced to compete for scarce supplies and to close borders, while struggling to provide for the continued health and wellbeing of their citizens.

The consequences for international development are apparent: COVID-19 has disrupted already lagging progress towards the Sustainable Development Goals. In response, the UN has called on all stakeholders, including the private sector, to Build Back Better (first used in the context of disaster risk reduction) to aid COVID recovery and jump start the Decade of Action. A key theme at the High-Level Political Forum in July, the UN’s annual check-in on progress towards the SDGs, was how to engage the business community as partners, not simply funders, for development.

But even as the UN recognizes the private sector’s role in driving development, the mechanisms to include business in the policy-making process to deliver on the goals remain underdeveloped.

Multilateral diplomacy is still the privilege of governments. The draft ministerial declaration from the High-Level Political Forum, still being negotiated, marginally mentions the private sector, while Member States call on the business community to contribute towards the estimated trillions in investment to implement Agenda 2030.

The “Business and Industry” group is only one of many major stakeholder groups at the UN; competition for attention is stiff in this crowded environment. With the exception of the International Chamber of Commerce, Observer Status at the General Assembly is still reserved for intergovernmental organizations. And while initiatives like the UN Global Compact have helped facilitate partnerships, by design such programs act as a bridge between the UN and businesses rather than a formalized, ‘seat at the table’ for the private sector to engage. As a result, when it comes to drafting resolutions and creating mandates, Members States still reign supreme.

Without a meaningful framework for businesses to participate in the policy-making process, it will be difficult to scale up action for COVID recovery and accelerate progress on the SDGs. Institutionalizing a role for the private sector at the UN would promote sustainable engagement, facilitating a move from ad hoc collaboration to long-term investment. This would also enable the shift towards integrating sustainable practices into the core of companies’ work. An institutionalized role would also increase transparency and accountability for the private sector, especially on the SDGs. Finally, this level of sustained engagement would help build trust between the UN and the private sector, an essential prerequisite for agile and effective partnerships, especially in moments of crisis.

Businesses have never been more willing to engage. Participation in the UN Global Compact has greatly expanded in the last decade, companies are increasingly comfortable talking about Agenda 2030, and there is more discussion about the diversity and unique role of MSMEs in development. As we wrote at UNGA 74, corporate pledges like those made at the 2019 Climate Action Summit are promising signs that leadership on global challenges can come from all sectors.

The question now is whether this willingness to collaborate can be harnessed to drive progress with governments and lay the institutional framework for a stronger, more effective multilateralism.

UN 75 was always envisioned to be a moment of reflection, but the tone of this anniversary is necessarily more somber, more restrained. And though a virtual UNGA will be more accessible to broader audiences, the real policy-making processes may be even more restricted to the few representatives allowed to meet in the UN. Yet COVID-19 has shown that a robust, well-funded and coordinated response to global crises will depend on a strengthened multilateral system that can quickly utilize the resources of both governments and business. This won’t happen unless Member States are willing to open up the policy-making process and create an institutionalized framework for the private sector to engage.

Institutional change may only be possible in a moment of crisis, as countries reel from the health toll of COVID and ballooning national debt, and businesses have been forced to rethink supply chains. It is the hope that governments and the private sector alike can take advantage of this unusual UN anniversary to not only Build Back Better, but reimagine a multilateral system that is better equipped to confront the next and potentially more severe crises down the line.

We’ll be covering key UNGA 75  events over the coming weeks. Follow us on Twitter to join the conversation!