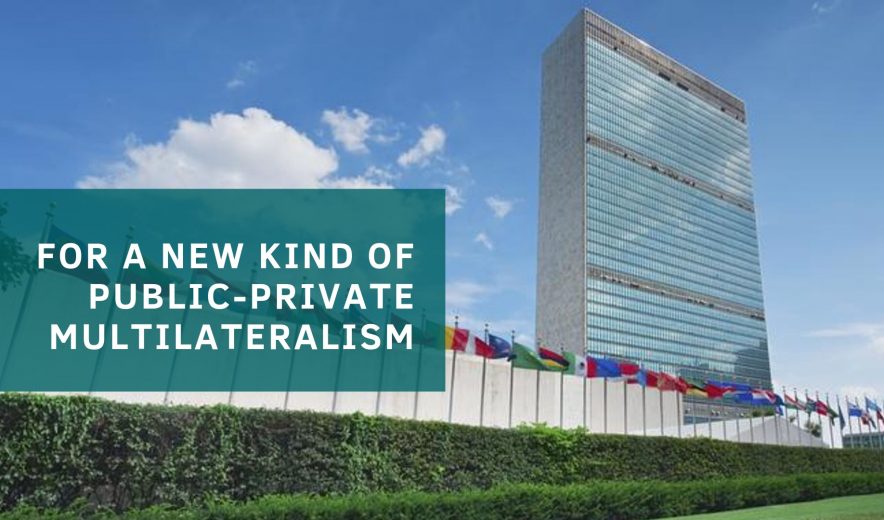 For a New Kind of Public-Private Multilateralism

The June 2018 G7 Summit hosted by Canada’s Justin Trudeau served as a cautionary tale to the group’s next host, France’s Emmanuel Macron. Seeking to avoid the last-minute embarrassment suffered by the Canadian PM – ambushed by US President Donald Trump, who refused to endorse a joint declaration he and his fellow leaders had just signed, Macron decided against the traditional closing joint statement. The focus would be, reporters were told, on strategic, bilateral dialogues. But not only.

Ahead of the G7 summit held in Biarritz last August, Macron sponsored an initiative spearheaded by Danone and 33 other leading global firms to tackle social inequality, the G7 Business for Inclusive Growth (B4IG) coalition. Together, these companies employ more than 3.5 million people around the world and have combined annual revenues of over USD 1 trillion. They pledged to invest a combined total of over USD 1 billion in more than 50 current and future initiatives, benefiting 100 million people. The group, supported by the OECD, aims to advance human rights, workplace inclusion and diversity and value chain inclusiveness.

Only time will tell whether the group delivers. But if it does, even modestly, this unprecedented initiative could prove that the world has found a new kind of mechanism in the rusty toolbox of global governance.

Corporations’ growing willingness to make this kind of commitments is no doubt, in part, enlightened self-interest:  consumers increasingly expect companies to care about the world beyond profit margins. But it’s not all down to that. A deeper, more complex current is driving a steady change from business as usual. Even the world’s most respected liberal publication, the Financial Times, called last week for capitalism to hit the reset button, arguing that the focus on maximising profits and shareholder value is no longer sufficient. The long-term health of free enterprise capitalism will depend on delivering profit with purpose, says the FT. An increasing number of CEOs seem to agree.

Here in the US, evidence of corporations’ political assertiveness abounds, particularly since President Trump’s inauguration: Walmart recently pledged to ban assault weapon sales – something the US Congress seems unable to achieve; JPMorgan Chase, Starbucks, Walmart, Amazon and others increased their minimum wage; Amazon became the first company to sign The Climate Pledge to be net-zero carbon by 2040 — a decade ahead of the Paris Agreement’s goal of 2050.

This week, the world turns its eyes to New York City, where the United Nations’ 74th General Assembly week kicks off with two high-level meetings: one on climate change, the other on universal health coverage. The Trump administration doesn’t support the latter and doesn’t believe in the former. Without the support of the wold’s most powerful democracy on either issue, what can governments alone really achieve? If the joint declaration of a group of 7 country leaders – close allies and otherwise aligned on most issues – could not survive long enough for the ink to dry, how can 193 sovereign countries agree on the complex, costly solutions that are so desperately needed?

While young people, outside, take to the streets in a global strike to protest against climate change inaction and world leaders, inside, gather within the security perimeter, representatives from civil society – including corporations and their leaders– will be in the corridors looking to support, inspire, partner, invest and, hopefully, deliver. A group of 87 major companies, including Ikea, Nestle, and L’Oreal, are leading the way at the Climate Action Summit, making pledges to align with the Paris deal.

These efforts will probably only be successful if they are genuine, concrete and scalable. Corporations wishing to contribute to sustainable development and global progress should have a clear and realistic vision of what they can achieve, be ambitious, transparent and prepared to be held accountable. NGOs keen to support those efforts need to be demanding but open minded, they need to insist on concrete outcomes but also accept the realities of business and that more often than not, perfect is the enemy of good. Governments need to provide the political leadership, facilitate the dialogue and create an incentive-driven conversation for all.

Naturally, not all the world’s challenges will warrant a corporation-driven solution. And the world cannot rely only on the good will of a handful of businessmen and women. Governments still need to be in the driving seat and global summits like the UN General Assembly remain necessary to raise awareness, increase pledges and investments, and apply the right kind of pressure on public and private actors, including business. But with the right strategic leadership, public-private partnerships can go some way towards compensating the inevitable, inexorable erosion of old-school multilateralism.