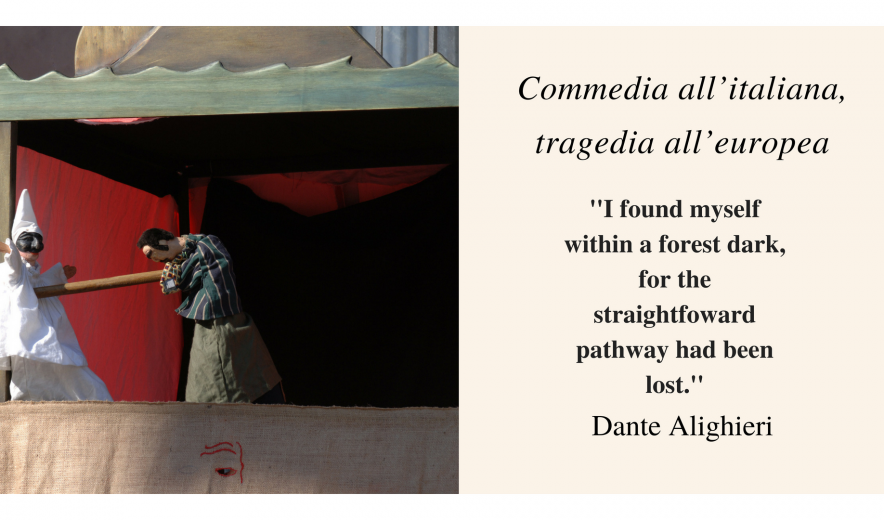 Scene One: After three months of party-political wrangling, the Centre-right coalition falls apart, the divided Democratic party loses more and more ground and the unthinkable happens: the populist parties, M5S and Lega, join forces. Even though they have little in common other than anti-establishmentarianism and euro-scepticsim, they thrash out a joint government programme. But they cannot agree on who should be Prime Minister, so they propose Giuseppe Conte, a virtually unknown university professor as a “puppet” PM.

Scene Two: The President of the Republic, Sergio Mattarella, accepts the proposal and mandates Conte to form a government (never mind whether he did or did not study at New York University). But when the M5S and Lega insist on Paolo Savona, a tenacious critic of the euro and the author of a plan for extracting Italy from the single currency, as Economy Minister, Mattarella exercises his veto, invoking the convenient article 47 of the Constitution, which requires him to protect Italians’ savings. The same day he asks Carlo Cottarelli, an economist and former IMF official, to form a so-called “President’s government”, aimed at calming market turbulence before guiding Italy to new elections.

Scene Three: Among outrage over a “coup d’état” and calls for the President’s impeachment in “populist” circles and sighs of relief in “establishment” circles, it quickly becomes clear that Cottarelli would not gain the confidence of Parliament. Meanwhile the “spread” flies, the markets tank, stocks are hit across Europe and even across the Atlantic.

Scene 4: Cottarelli returns from consultations with the President empty-handed. M5S leader Di Maio sees a new chance to form a political government, withdraws his call for impeachment and declares himself ready to start fresh talks. Initially the Lega is tempted by fresh elections, but the prospect of elections in late July is unnerving, as many Lega voters would likely prefer to stay on the beach. Mattarella decides to give M5S and the Lega another chance to form a government.

Scene 5: M5S and the Lega reach a new agreement to form a government. Giuseppe Conte, the unknown professor with the creative CV, is back on the scene as PM-deisgnate. M5S and Lega leaders Di Maio and Salvini will be Labour and Interior Ministers respectively; economics professor Giovanni Tria, a critic of the euro, but not a proponent of a referendum, is to be Economy Minister; former high-ranking Commission official Moavero Milanesi Foreign Minister; and the controversial economist Paolo Savona is also back on the scene as Minister for EU Affairs. Thus the first anti-establishment government in Italian republican history is due to be sworn in at 4pm today.

You would be forgiven for being confused and dismissing the whole saga as the usual Italian comedy. Ironically, this particular comedy has its roots in a flawed electoral law that was designed to exclude the anti-establishment M5S from any future government. Drafted in two weeks and adopted in December 2017 under the Gentiloni government – the fifth Prime Minister in as many years and the fourth unelected PM in a row – the electoral law (so called Rosatellum) failed in its purpose, generated instability and satisfied no-one.

Unfortunately for both Italy and Europe, the epilogue of this ongoing comedy is likely to take a more dramatic and serious turn. Following Mattarella’s intervention, the new ministerial team may cause less panic in Brussels and among investors, but the political leadership is the same. The government programme includes universal basic income, a 15% flat tax and higher pensions. The cost of these reforms, estimated at over €100 billion, can only realistically be covered by further increasing public debt (currently at €2.3 trillion). No party has any sensible proposals for reducing this debt mountain, other than through fiscal stimulus-induced growth, which would need relaxation of the European Fiscal Compact.

What is the first thing that the new government will do? Take its demands to Brussels and, when they are turned down, blame the inflexible, dogmatic EU, stoking yet more popular resentment and calls for liberation from the yoke of the Eurocrats. This vicious circle is perhaps inevitable. After all, the current situation is the result of twenty years of political failures, misjudgments and prevarication, in Rome, Brussels and Berlin. And perhaps a major crisis such as that which is on the horizon will be a necessary catalyst for indispensable reforms, both domestically and at European level. That would be the optimistic view. The tragedy is that contrary to what Jean-Claude Juncker says, Italy’s – and Europe’s – fate does indeed lie to a large extent in the hands of the financial markets. Democracy may have won the day in Italy, but the markets are unlikely to allow several of the promised flagship measures – not when the country is hostage to €2.3 trillion of public debt. One way or another, Europe will have to help Italy out of this quagmire; otherwise it may turn into a bigger challenge than Brexit or the sovereign debt crisis of 2011.