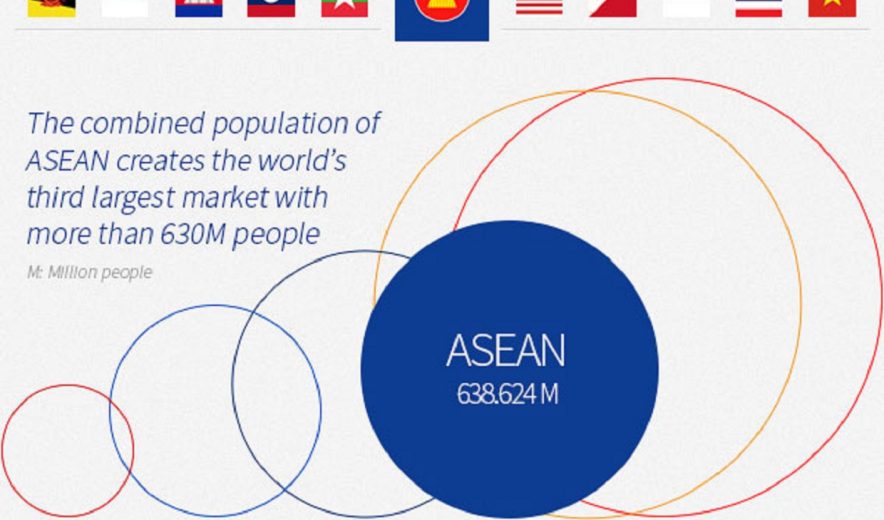 Third Largest Economy in Asia
Founded in 1967, ASEAN is home to a fast-growing population of 622 million people and a booming $2.6 trillion economy – ASEAN is now the 7th largest economy in the world and the 3rd largest in Asia.

EU links
The EU and ASEAN Member Countries enjoy strong commercial ties – ASEAN is the EU’s 3rd largest trading partner and the EU is ASEAN’s largest source of Foreign Direct Investment (25% of ASEAN’s total FDI). The EU is negotiating a series of bilateral Free Trade Agreements (FTAs) with ASEAN member states, which will help businesses forge closer links between the EU and ASEAN. The FTAs with Singapore and Vietnam are awaiting ratification and FTA negotiations are underway with Indonesia and the Philippines. 2017 also marks 40 years of EU-ASEAN ties.

The ASEAN Economic Community (AEC) – Asia’s “EU”?
Launched in 2015, the AEC was mistakenly heralded by some as Asia’s EU. ASEAN’s fundamental principle of “non-interference in domestic affairs” is however very different from the EU’s “ever closer union” and means that ASEAN integration is destined it to stop at becoming a single ASEAN market. Even so, the AEC remains a work in progress. Removal of tariff barriers and efforts to harmonize regulatory standards are underway, but economic nationalism and differing national standards and policies will limit the level of economic integration for the foreseeable future.

ASEAN in a Pan-Asia context
With the Trump Administration withdrawing from the Trans Pacific Partnership (TPP), the focus has shifted to the Regional Comprehensive Economic Partnership (RCEP). RCEP encompasses ASEAN and China, India, Australia, New Zealand, Japan and South Korea. RCEP is less ambitious than the TPP in addressing technical barriers to trade, intellectual property, liberalization of government procurement and services, amongst others. Nonetheless, RCEP provisions that liberalize investment rules and reduce tariffs on 90% of goods traded will help to forge a more integrated production network in Asia. With more protectionist economies like India and less developed economies like Myanmar involved, RCEP negotiations are proceeding at a slow pace and are unlikely to be concluded this year.

Risk of Domestic interests overshadowing ASEAN participation
Regional integration may have to take a back seat to domestic political events. Reserved for ethnic Malay candidates for the first time, Singapore’s presidential elections resulted in a walkover by the government’s preferred candidate, sparking discontent and bringing the taboo topic of ethnicity to the forefront. Dogged by allegations of embezzlement of the government-owned strategic development fund, 1MDB, Malaysian PM Najib might hold snap parliamentary elections to take advantage of weak and fragmented opposition parties. After the demise of his father last year, the new King of Thailand Maha Vajiralongkorn has acted to exert his authority: purging more than 30 senior aides and expanding his political powers by altering the draft Constitution approved in a referendum last year – pusing back elections, yet again, to November 2018. In Indonesia, the results of the 2017 Jakarta gubernatorial elections has emboldened Islamic hardliners and political rivals of President Jokowi and will cause an inward-looking Indonesia to focus even more on domestic issues in the lead up to the 2019 Presidential Elections. The growing international spotlight on the plight of the Rohingya in Myanmar and on the extra-judicial killings related to Philippine President Duterte’s controversial “war on drugs” will focus these governments’ attention to issues at home.

The international business community is still positive on a dynamic ASEAN
Despite the challenges outlined above, confidence in business prospects in ASEAN remains robust. Three recent surveys of business leaders in Europe, the U.S. and Australia highlight the sentiments businesses have towards investing and operating in the dynamic ASEAN region. While highlighting optimism among business leaders, who on the whole anticipate increased profits, these surveys also identify the multiple country-specific challenges that remain to doing business in the region.

Cause for Celebration
Since 2000, ASEAN’s economy has been expanding at an average of 5% annually.

ASEAN continues to maintain its goals of achieving rapid economic development and stability. Highlights to date include the implementation of the ASEAN Free Trade Area (AFTA) which cut intra-ASEAN tariffs; the Treaty of Amity & Cooperation in which signatories agree to peaceful resolution of disputes and renounce the use of force; and the launch of the ASEAN Economic Community (AEC) in 2015 to create an integrated ASEAN market. While the AEC fell short of meeting its 2015 objectives, the AEC Blueprint 2025 offers a roadmap for achieving a fully integrated single market in ASEAN. Realising this vision for the ‘’living and breathing modern miracle’’ that is ASEAN and will require the active and sustained engagement of the business community in support of the efforts of ASEAN and its member states.