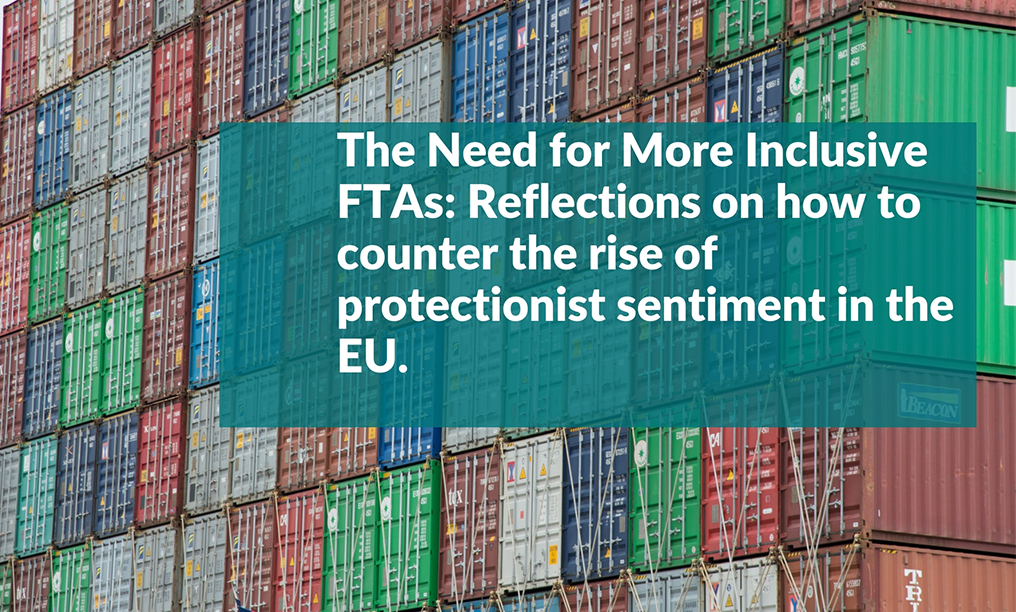 The election of Donald Trump as President of the USA has dramatically reignited the recurring debate on protectionism vs. free trade. Commercial self-interest has been a natural and essential driver of US trade policy. But the current US administration’s narrative on trade, in sharp contrast to the US approach since World War II, seems to have abandoned any reference to – or acknowledgement of - the positive strategic contribution of free trade to international stability and prosperity.

Trade deficits and their supposed detrimental link to US national security have become the main stated criteria for evaluating the USA’s key trading relationships. The constant threat and use of bellicose trade policies as well as the evident unwillingness to engage in efforts to reform the admittedly increasingly ineffective multilateral trading system, reflect the Trump Administration’s vision of their disruptive role in the world.

Against this backdrop, the EU has proclaimed itself as the new global champion of free trade and bulwark against rising protectionism. In doing so the EU has constructed its own narrative in which the distinction between the desired goal – promotion of free trade – and the instrument chosen to pursue it – Free Trade Agreements (FTAs) – appears to be increasingly blurred. As pointed out by Harvard Professor Dani Rodrik in his recent article “What do trade agreements really do?”, this tendency shared by numerous economists and mainstream politicians to consider free trade and FTAs as essentially equivalent concepts, may lead to unintended consequences. Today’s FTAs, which go beyond the mere liberalisation of tariffs and lowering of import restrictions, may in fact deliver outcomes that perpetuate rent-seeking behaviour and welfare-reducing effects that ultimately run counter to the very objectives that contemporary defenders of “free-trade” claim to seek.

In order to counter the threat of protectionism effectively and offer a more attractive alternative, the EU desperately needs to regain the legitimisation of its trade policy across larger sectors of society. Rather than relegating critics of globalisation into what Hillary Clinton might call the “basket of deplorables”, EU leaders should engage in a much-needed critical reflection on how to ensure that the gains of FTAs are shared more equally. The EU institutions have indeed begun to acknowledge the need to strengthen the link between trade and sustainable development, as evidenced by the ongoing debate spurred by the European Commission’s reflection paper Harnessing Globalisation. However, improving the general sentiment about international trade will require focusing on an even more central issue: ensuring greater participation of SMEs in trade opportunities arising from FTAs.

How many times have we heard that “SMEs are the backbone of the European economy” in Brussels circles? The slogan perfectly reflects reality, as 99% of all businesses in the EU are SMEs, which provide two-thirds of the EU’s private sector employment. Yet SME participation in international trade is very low and SMEs are often the companies whose competitiveness is most challenged by imports, particularly in the manufacturing and farming sectors. Several surveys measuring SMEs’ perception of FTAs suggest that they are either largely unaware of or sceptical about the potential benefits that FTAs can provide. According to UPS European SME Exporting Insights, for instance, 94% of French SMEs (which in turn account for 99.4% of the country’s enterprises) maintained that the TTIP agreement between the EU and the US would benefit exclusively the large corporations.

So, what can the EU do concretely in order to increase participation of SMEs in free trade agreements? Firstly, provisions in trade agreements should be designed in such a way as to enable SMEs to actually take advantage of the increased market access opportunities. Often this is not the case. Take for instance the issue of Rules of Origin (ROO), which determine whether a product can qualify for a reduced tariff or duty rate as a result of an FTA. In contrast to standard international practice, EU FTAs include a very restrictive set of ROO, particularly for dairy- and sugar-based products (i.e. ice-cream, confectionery, chocolate etc.). While this is essentially for protectionist reasons, i.e. to limit imports of ‘sensitive’ products, the EU shoots itself in the foot by making it in turn very difficult for its own exporters to comply with such rules as applied by the counterparty to the FTA. In the recently concluded EU-Japan FTA, for instance, it will be practically impossible for small chocolate producers to take advantage of the 0% tariff, because the weight-based rules of origin are simply unworkable. Ironically, for this FTA even the protectionist argument does not stand up, given that Japan’s exports of dairy- and sugar-based products are and will remain negligible.

Another reason for the low degree of internationalisation of SMEs is that they often lack the necessary expertise and human resources. SMEs will rarely be able to afford the services of specialist consultancies or local agents. The EU and the Member States should offer more to SMEs in terms of services to facilitate export activities, notably with regard to access to trade financing, digitalisation and educational opportunities.

In the longer-term, the development of blockchain technology has the potential to revolutionise international trade – and particularly so for SMEs – by facilitating trade procedures and reducing trade costs. By increasing the transparency of transaction practices, blockchain technology can enable SMEs to better access trade financing. Moreover, SMEs would be able to use blockchain to prove the provenance of goods via end-to-end supply chain tracking, thus overcoming the problems regarding ROO requirements and expedite customs clearance times. As noted by our colleague Nick Botton in his paper on “Blockchain and Trade”, while over-regulating blockchain would be a mistake, it is clear that more could be done to speed up the adoption of the technology in the EU. A regulatory framework which is truly conducive to blockchain innovation (i.e. ensuring the legal validity of blockchain documents and preventing Member States from raising unnecessary barriers), is thus urgently needed.

In conclusion, the EU should shift its perspective from viewing FTAs chiefly in terms of trade volume/value generation, towards a more granular evaluation of how trade gains are distributed, with a particular focus on opportunity creation for SMEs: behind every SME there are entrepreneurs and workers who account for the bulk of the labour force, who are also voters with the ability to sway public opinion. Instead of paying lip-service to SMEs, Europe’s free-trade agenda would benefit from fully acknowledging their pivotal economic and societal role and reflecting this in the way it structures its FTAs, so as to enable the greater participation of SMEs in the opportunities of open trade. Spreading the benefits is an essential condition for greater public support, without which it is hard to see how the rise of protectionist sentiment can effectively be countered longer-term.